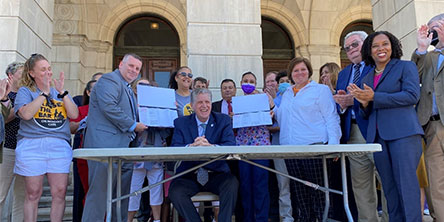 RI politicians smile as they experiment with your parents and grandparents and planet-leading mandates.

Last week, I worried that the recently enacted “Nursing Home Staffing and Quality Care Act” handed bureaucrats power that they aren’t competent to wield.  This week, news has reached Australia that the Ocean State’s mandates in this area blow the continent-nation’s own version out of the water.

Rhode Island Governor Dan McKee (pictured) has signed into law the Nursing Home Staffing and Quality Care Act, which sets the highest staff to aged care ratios in the US.

In Australia, Treasurer Josh Frydenberg announced in the 2021 Federal Budget, from 2023, staff will be required to spend at least 3 hours and 20 minutes a day with each aged care resident with at least 40 minutes of that time with a registered nurse.

The US State of Rhode Island is having the same staffing issues as Australia. Where to find the staff required?

Imposing the most restrictive rules (perhaps) in the world is not actually that difficult if elected officials are reckless.  It’s just a matter of 58 bribed, politically cornered, or gullible people.  What’s difficult is setting rules that fairly balance various the involved parties in a way that doesn’t cause unintended and undesirable consequences.

Sources tell me the Brookdale Senior Living in Tiverton is laying off around five dozen employees and vacating patients from its assisted living rooms.  The company is in the midst of a large integration with HCA Healthcare, so it’s possible that reorganization led to the change in Tiverton.

However, layering minimum staffing on top of a moratorium on new or expanded licenses for nursing homes can’t help.  For that matter, letting it be known that the state might at any time impose the most extreme mandates on the planet on your business surely gives boards and business owners of all industries reason to set up shop somewhere else.

Watch for the number of nursing home rooms to increase, forcing seniors into home care whether they and their families want it or not, thus creating more members of the recently unionized home-care workforce.

Featured image of Governor Dan McKee, the lieutenant governor, and various legislators from The Weekly Source.

TCI is another area where our politicians are happy to be extremists to the detriment of Rhode Islanders. – Anchor Rising

[…] week, an Australian news source noted how extreme Rhode Island politicians are when it comes to imposing mandates on companies that serve our elderly […]

[…] passed and Governor McKee signed the most demanding minimum standard for nursing home coverage possibly in the entire world.  That means a greater demand for nurses within the Rhode Island market.  People I know in […]

[…] about Governor Dan McKee’s delay of the new nursing home staffing mandates is that they are arguably the most-extreme minimum standards in the world.  Imposing new mandates in the middle of a […]