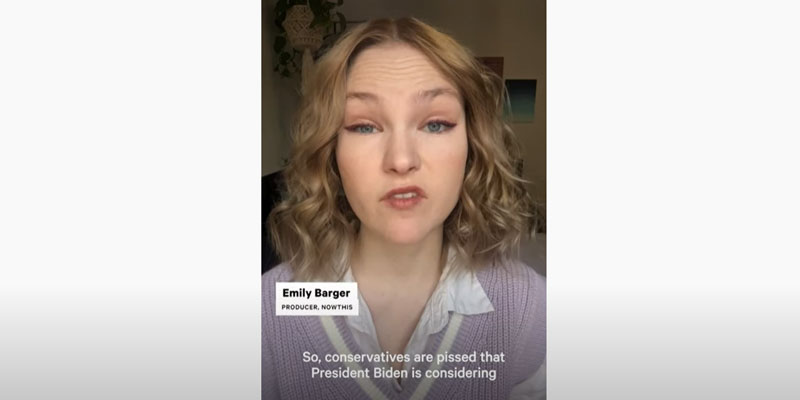 “Youth media” is more concerned with Democrats than with minorities on the Supreme Court.

Accuracy in Media gave me some space to express frustration with the dishonesty of a video from NowThis that attempts to cover for Joe Biden’s pledge to pick the next Supreme Court justice from a narrow demographic:

NowThis is lying to its young audience when it claims that “conservatives are freaking out at the idea of a Black woman on SCOTUS” (i.e., the Supreme Court of the United States). Producer Emily Barger lays the nonsequiturs and condescension on thick in the short space of the one-minute clip, returning to the same lie over and over.

“Conservatives are pissed that President [Joe] Biden is considering replacing Justice Stephen Breyer, an old white dude, with a Black woman,” it begins.

Something is very strange about this all.  The political strategy of calling Republicans racist is really old and stale, at this point.  How can media ostensibly serving youth still get away with pushing it?  Moreover, as I note in the article, it isn’t difficult to discover that it’s false — arguably inverted, politically.

Another curious aspect is the connection of this story with the Whoopi Goldberg dustup.  Goldberg’s offense was claiming the Holocaust was not about racism because Jews are white, and that’s exactly how Barger treats Jews.  Justice Breyer is just “an old white dude” as far as the blond, blue-eyed Barger is concerned.

It’s really amazing that progressives get away with the lies they tell.  No wonder they’re so desperate to start pushing censorship throughout our society.

Although the SCOTUS has had a black and Jewish “seat” since the 1920’s, or 30’s; somehow, I still find it offensive to eliminate 96% of the judiciary when seeking the most qualified candidate.