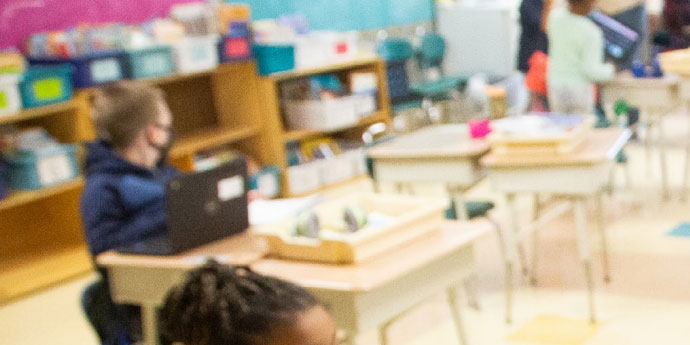 Is the Met School abusing students with anti-racism indoctrination?

South Kingstown parent advocate Nicole Solas has been, let’s say, having words with Met School special education teacher Emily Bowden.  The back-and-forth is mainly social media snark shooting, so we shouldn’t assume that Bowden’s bombast is evidence of the school’s operation, but she does facilitate an important point that isn’t often made in these arguments.

As far as I can tell, the whole thing started when Bowden chimed in on a Twitter reply thread to a tweet in which Solas calls out a teacher at Blackstone Valley Prep calling parent advocates “mediocre white people.”  In the heat of antagonizing people for whom she obvious has no basic respect or sympathy, Bowden posted an image suggesting that nothing individual white people can do will change their white privilege, and she made the following reference to activities in her own school:

Btw, here’s a link to our website. You can find out surveyworks data there- it’s pretty impressive! We are also SUPER proud of the anti-racism work that our entire staff has been engaged in over the past years. I encourage everyone to check us out.

One massive problem with this whole cultural argument is that nobody defines their terms, so it’s important to remember that Bowden does not specify what that “anti-racism work” has entailed or whether it’s been limited to teachers or has roped in the students.  Still, her provocation raises a point that’s easy to forget.

Thus far, much of the talk of “equity audits” has been in districts that are majority white (e.g., Portsmouth), where at least advocates can claim they don’t want a minority students to be poorly served by their schools.  But as the People’s Data Armory shows, Met School students are 80% non-white:

So, to the extent that the school is making concepts like “anti-racism” and “white privilege” part of its curriculum or the way it interacts with students, it’s targeting a minority of its students, who may already feel as if they don’t belong.  Without investigating, this is speculation, but it’s conceivable that a hostile environment created by “anti-racism” helps explain the fact that the number of white students in the school just about halved in less than a decade.

Whatever the specifics at the Met School, these concepts are poison, and when they target children who are a minority in their communities, they are pure abuse.

Featured image from the Rhode Island Department of Education.

oh please this “article” is total trash. you said it yourself, speculation. those trends could be based on all kinds of things. maybe non-white people feel more comfortable in a school that recognizes racism as a systemic issue. it’s not abuse and calling it that trivializes actual abuse.

“Without investigating, this is speculation…” pretty much sums up this garbage editorial. Maybe do your research before you start writing about things you clearly know zero about. You know what they say about opinions….

You both make fair points. I’m curious about a couple things, though.

First, do you think the teacher is lying about all the “anti-racism” activity in the school?

Second, since it isn’t just that there are more minorities but that the actual number of white students has fallen by half, what do you think explains that?

Why do we need to do your research for you? No, the teacher is not lying. Maybe visit and actually talk to the faculty instead of armchair speculation. You know… investigate. As for the makeup of the schools, it’s called demographics… look it up. In your neck of the woods the number of white students at the Met is by far the majority. You want to be taken seriously as a journalist? Then put in the time. Stop speculating and start investigating. Jeez!