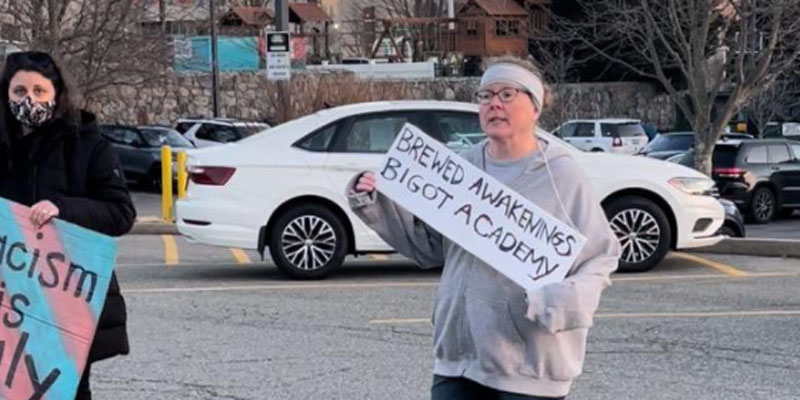 Does the headline of this post seem unreasonable?  I can’t decide.  I wrote it to illustrate a point about the unreasonable activism of woke progressives, but as I considered whether to go with it or not, the statement began to look like a pretty straightforward description of events.

The “fascist” is Jennifer Lima, who is a member of the North Kingstown School Committee.  The fascism is her effort to harm a business for allowing parents in her district to schedule an event on its premises.  (Her crew managed to get the event canceled, although the parents involved managed found another venue.)

The incriminating word in the following quotation is the “but” that retroactively erases her disclaimer of respect for civil rights:

“Everybody of course has their First Amendment right to speak and to share, you know, their thoughts on things. But I was disappointed in Brewed Awakenings that they had hosted this and that they were posting it on social media because that indicates support,” demonstrator Jennifer Lima said.

As the featured image of this post shows, Lima wasn’t just “disappointed.”  She protested outside of the business calling it a “bigot academy.”  In case you’ve been smart enough to pay minimal attention to cultural developments over the past few years, that’s a pretty severe accusation these days, and taking action to deprive others of their livelihood based on mere association with people whose ideas one dislikes is fascistic.

That is why roping Toray Plastics into a story about one of its employees seemed like it might be unfair (let alone noting that the company has received over a half million dollars from the state government for programs that may or may not have benefited her).  In the limited context of trying to illustrate a point, however, I think a little edginess is justified.  If anything, I’m being more fair than Lima, inasmuch as I’m only observing the connection, not accusing Toray of endorsing her fascism.  On that count, the company’s PR department has not responded to my inquiry, but we can safely assume that the similarity between her titles as Political Organizer and Demand Supervisor is a pure accident of language.

Our community (broadly speaking) needs to back away from the edge of escalation.  There have always been — think Salem witch trials — and will always be people like Jennifer Lima, who become so intoxicated with their own righteousness that they think any level of aggression justified for the good of humanity.  They only become dangerous when others begin to react to their ravings as if they are reasonable… and especially when they begin to take government offices.

Well said Justin…Jennifer Lima was “disappointed” that a public discussion was taking place at a public venue so she decides the business owner is a bigot. It’s truly amazing that her NK constituents don’t see the irony in her statement that everyone has a First Amendment right to speak, yet condemns a business for allowing free speech.

Oh, as a constituent in NK I see it clearly. This is only one reason I will support her replacement when re-election comes around.

I get what you are saying here, though I think it is more a mark of communism or anarchism, when one demonstrates rabid intolerance toward other ideas. A well-written narrative!

I wish someone would explain what “BREWED AWAKENINGS BIGOT ACADEMY” means. I’m old.

I’m still not understanding her point. Perhaps she is a fruit loop.

I have accepted that there is no longer a chance of “coming together” with fascists, communists or socialists. This war we are fighting will eventually weed out these folks. It may take longer than I can bear, but THEY will lose.

brewed awakenings was planning to host an event featuring people who are known bigots. one such nicole solas has proudly confirmed she is transphobic and was a possible guest speaker at this event. hosting bigots is not a good look.