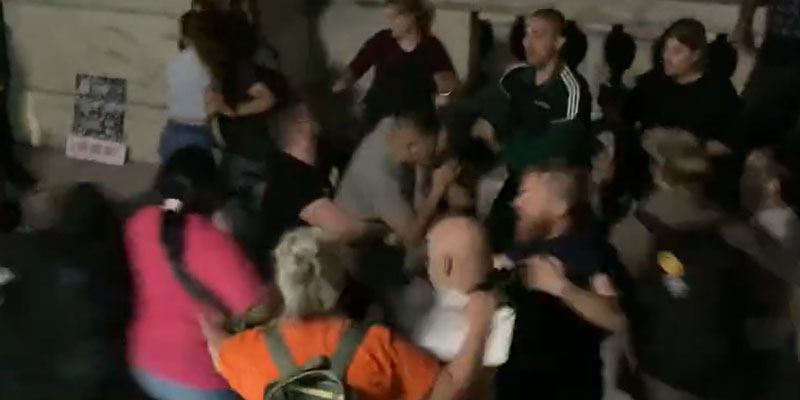 From the beginning, the likelihood that Providence police officer Jeann Lugo would receive a fair hearing was vanishingly small.  His political views conflict with those of the ruling class in Rhode Island, and he therefore does not enjoy basic rules of justice and due process.

How egregiously brazen this injustice can be is shocking, nonetheless.  Here’s how Providence Police Chief Hugh Clements describes Lugo’s actions on the night of the recent pro-abortion rally at the State House:

On June 24th, 2022 protesters were gathered at the Rhode Island State House demonstrating the U.S. Supreme Court decision on abortion rights. You, while off duty, were involved in a disturbance in which you were observed on video striking a female identified as Jennifer Rourke, age 40, on the left side of her face with your right hand. You then struck Jennifer Rourke a second time in the area of her face with your left hand and then walked away.

Walked away?  As plainly visible in video from Tommy Quinlan to which Monique linked the other day, after Lugo freed himself from Rourke, who was grabbing him from behind to prevent his protecting a counter-protester from unprovoked violence, he was tackled to the ground and pummeled until two State Police managed to get his multiple assailants off of him (before allowing them to “walk away”).

The chief can certainly have concerns about the challenges that Lugo’s involvement present for his department in our present environment, but either he is willing to issue official documents condemning an officer under his command based on no evidence other than a doctored video from a dishonest activist or he’s willing to brazenly lie to serve the interests of his political masters.

Either way, no officer in the Providence force should be confident that he will treat them fairly or with justice.  Indeed, anybody who may come into conflict with the ruling ideology of the Ocean State should have no confidence that the capital city’s law enforcement is capable of safeguarding their rights or their safety.