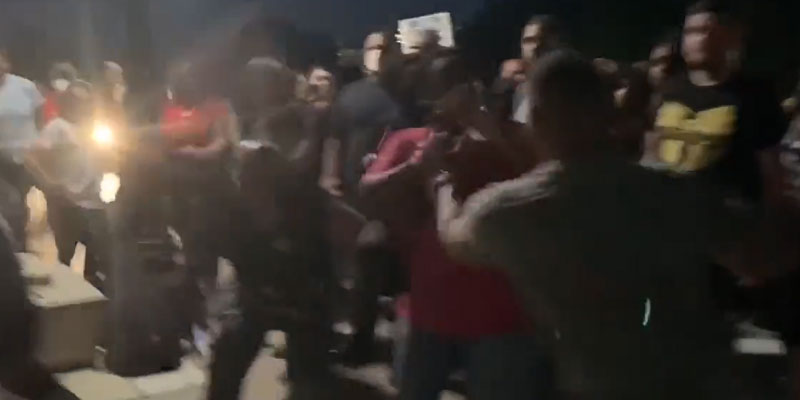 First things first: It is very difficult to imagine circumstances that entirely excuse the actions of Jeann Lugo in a five second clip from last night’s pro-abortion rally at the State House.  Lugo is a muscular man with police training.  Striking a woman — progressive candidate Jennifer Rourke — should not be something he would do except in extreme circumstances where it is unambiguously justified.

Along those lines, however, the second point is this:  Bill Bartholomew, who is basking in the attention of this clip, is a far-left commentator and activist, and the clip is only five seconds long… and that’s with the speed slowed down.  The real time that it reflects is probably more like one or two seconds.  Even as short as it is, the facts of the video should raise red flags for any responsible journalist.

It’s clear, for one thing, that the action was under way and that Bartholomew carefully clipped the video to show the objectionable moment, slowing it down to further distort reality.  Consider this, from WPRI:

12 News reached out to Lugo regarding the incident. Lugo said he was “in a situation that no individual should see themselves in” Friday night.

“I stepped in to protect someone that a group of agitators was attacking,” he said in a statement. …

Tensions appeared to reach a boiling point at Friday’s rally when counter-protestors entered the crowd and began shouting. The Rhode Island State Police confirmed two people were arrested, though neither have been identified.

Lugo was not arrested nor charged Friday night…

Given this limited information, the reality of the incident could be very different from what Bartholomew chose to portray, which national media has taken up enthusiastically, because it is so deliciously in keeping with their preferred narrative.  They find it helpful to counterbalance insurrection-like rhetoric from abortion advocates and an attempt to assassinate conservative Supreme Court justice with an attack on a pro-abortion black woman.

It could be, for instance, that pro-abortion activists outside the Rhode Island State House (the large, bald man crouching next to Jennifer Rourke or the three large men behind her in the video, perhaps) were attacking a pro-life man or woman who was counterprotesting, and Lugo stepped in, as he says.  Perhaps in the seconds before Bartholomew’s clip, Rourke was attacking Lugo, and the two swings shown were simply him defending himself.

We can’t tell.  Bartholomew has chosen to keep America in the dark on this question, and Rourke is predictably casting the incident in the most politically helpful light for herself and her cause.

Bartholomew should release his full video.  Frankly, a responsible state and national news media would be demanding that he do so before giving him all this attention.  If, as seems likely, he deliberately cropped what he released, it would be interesting to see Lugo sue him for damages for a high-tech form of libel.

In any event, nobody should have any confidence that Lugo will get a fair hearing.  Rhode Island is simply not that sort of place, anymore, which is a much more profound story that nobody is covering.  As evidence, observe whether anybody else raises these points, whether anybody in the state airs my expression of them, and whether the only attention that such points receive is condemnation as if it is beyond the pale even to raise such questions.

Having had cause to revisit this incident, I note that clarification is necessary. The day before the clip in question, Bartholomew posted a clip of about two minutes of the incident ending just after Lugo and Rourke’s confrontation.  He then clipped it and slowed it down for the post that went viral, which he pinned to his stream, as I recall, as the other video was pushed down.  I may have missed the earlier videos because he started them with his podcast logo, so not reading the text, I thought they were just episodes.

In any event, the doctored short video was clearly cut too short and shouldn’t have been slowed down, certainly for an isolated tweet meant to stand on its own.  Ethan Shorey of the Valley Breeze has insisted that Bartholomew’s action is no different than how TV news handles clips from time to time.  The difference is that TV journalists will typically include extended clips side-by-side with the doctored one, to provide context.  Bartholomew could have done the same.  He could have provided a link to the earlier video right in the same tweet.  At a minimum, he could have immediately added the full video as a comment to the clipped one, which he did not do for a week, when somebody asked for it, and after other people’s extended videos had been released.

[…] From the beginning, the likelihood that Providence police officer Jeann Lugo would receive a fair hearing was vanishingly small.  His political views conflict with those of the ruling class in Rhode Island, and he therefore does not enjoy basic rules of justice and due process. […]

[…] From the beginning, the likelihood that Providence police officer Jeann Lugo would receive a fair hearing was vanishingly small.  His political views conflict with those of the ruling class in Rhode Island, and he therefore does not enjoy basic rules of justice and due process. […]

[…] eventually posted his full video of the incident and melee, presumably after Justin Katz called him out for failing to do […]