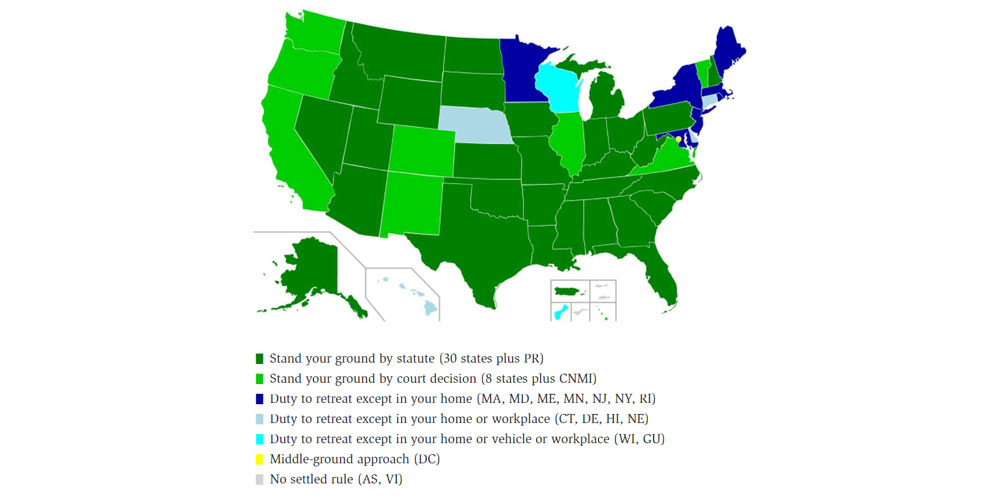 Rhode Islanders have to run away from danger.

Eugene Volokh has posted a quick updated review of state laws concerning when residents have a right to use deadly force to defend themselves.  And wouldn’t you know it, Rhode Island is one of only twelve states that fall in the “duty to retreat” category.  The rest of the states are some variation of “stand your ground”:

In duty-to-retreat states, you are not legally allowed to use deadly force to defend himself if the jury concludes that you could have safely avoided the risk of death or serious bodily injury (or the other relevant crimes) by retreating with complete safety.

In stand-your-ground states, you are legally allowed to use deadly force to defend yourself, regardless of whether the jury concludes that you could have safely avoided the risk of death etc. by retreating.

Of course, there are arguments to be made on both sides, and it’s possible to imagine a “stand your ground” policy that has too light of a burden of proof that the shooter felt threatened.  Still, it does seem that Rhode Island always errs on the side of trying to protect people from themselves while not giving them much room for self-protection.

Glad to find you through Insta.

I recommend reading Andrew Branca’s “Law of Self-Defense” book (and blog) for the facts about use of force law (in all 50 states) and “Stand Your Ground” laws in particular. In brief, a legitimate use of force, regardless of state, requires 5 elements, Innocence, Imminence, Proportionality, Avoidance, and Reasonableness. SYG changes only Avoidance, it changes nothing about whether a threat can be considered Imminent (the “is the threat real, part) nor the requirements of Innocence, Proportionality, or the Reasonableness of the defender’s perceptions and actions.