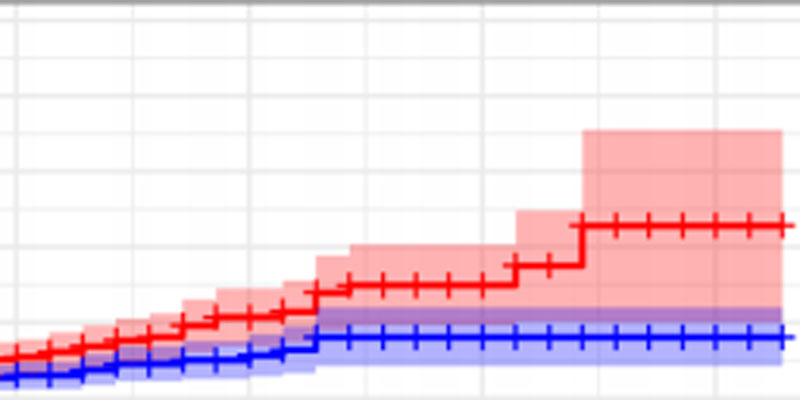 Be careful with Andrew Bostom’s advice on COVID-19 vaccines.

Over the past year, Dr. Bostom has presented an important contrary view on COVID-19 — in particular by pointing out how overly sensitive the tests to identify cases have been.  His recent arguments about vaccinating children, however, have been some of the most irresponsible uses of data I’ve encountered as an expert-skeptical writer. 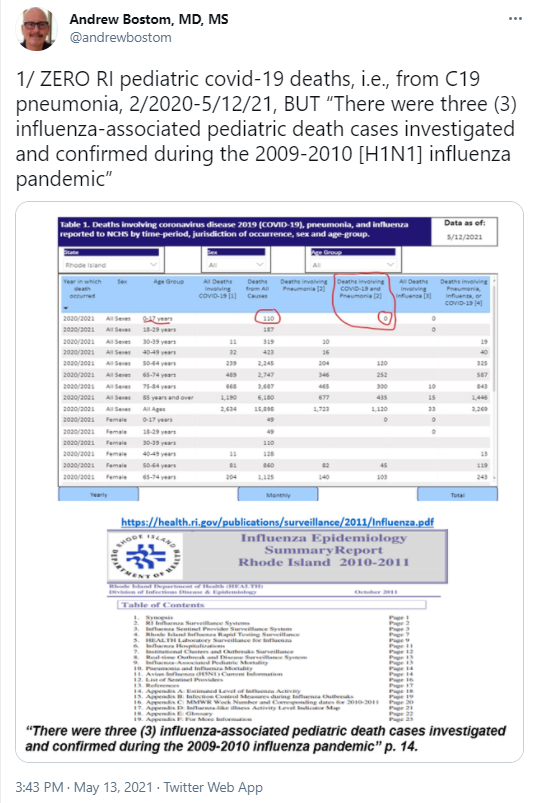 The chart is from the CDC’s National Center for Health Statistics.  You can go look at it yourself.  Notice that Bostom underlines the age group, circles the total deaths, and then circles a column titled “Deaths involving COVID-19 and Pneumonia.”  But notice that he doesn’t circle the column titled “All Deaths involving COVID-19.”  That space is blank for the 0-17 age range.

Why blank?  Because, as a note under the table says, “Empty data cells represent counts between 1-9 that have been suppressed in accordance with NCHS confidentiality standards.”  Blank doesn’t mean zero; it means 1-9.  If it’s zero, they put zero; if it’s just a few, they leave it blank so that you can’t use the data to identify the individuals.  The RI Department of Health does something similar.  In their data, RIDOH reports fewer than five COVID deaths in the 0-4 range and fewer than five in the 10-14 range.  This means that 2-8 Rhode Island children have died.  (Remember, of course, that this is death-while-testing-positive, whether or not COVID was the cause of death.)

Bostom’s treatment of the risks of the vaccine is arguably worse, because it can’t just be simply missing a table note.  Here he sends it to me along with an insult (which is always a red flag): 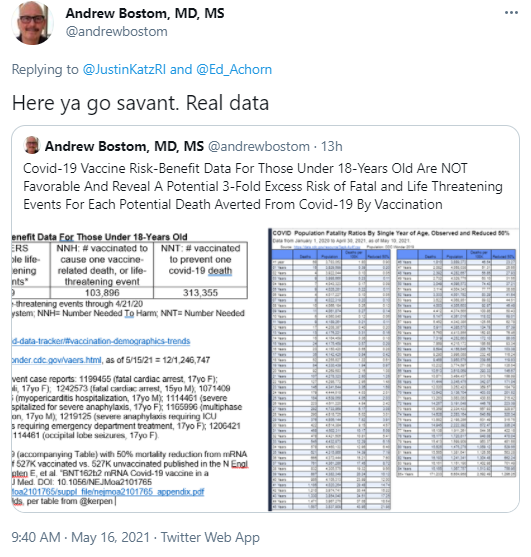 To view his tables go here.  In summary, Bostom takes the number of deaths and severe adverse events reported after children have received a COVID vaccination, calculates how many vaccinations produce one of them, and then compares that with an estimate of how many vaccinations are needed to prevent a death.  It’s important to be clear that things are reported as serious adverse events after vaccination if they are “life-threatening” regardless of how easily they’re treated.  A sever allergic reaction, for example, is life-threatening but can be quickly treated without long-term harm.  It’s also important to remember that the vaccine numbers have the same problem as the infection numbers:  They are adverse events after the vaccine or after infection, but not necessarily from them.

Look again at how he summarizes his conclusion, because that’s the sharp end of the misleading analysis:

The phrase “3-Fold Excess Risk” makes it sound as if Bostom is comparing categories that are the same, but he’s not.  He’s comparing death and adverse events from the vaccine with only deaths from the virus.  Bostom has said in interviews that the hospitalization data from COVID is not reliable, and I’ve long been agreeing that the virus has been muddied with hospitalizations that have nothing to do with COVID.  But that’s not an excuse to compare things that aren’t the same.

Bostom completely ignores the fact that the vaccine is not only preventing death; it’s also preventing severe effects from COVID.  That’s the real comparison, and whether you take the non-deaths out of the vaccine column or put them in the COVID column, it obviously changes the calculation.  For example, using his data, the number of vaccinations to cause one related death (his NNH) would be 415,582, which is obviously higher than his calculation of vaccinations to prevent one COVID-19 death.

But about that second number…

A note on Bostom’s table suggests that he doubled the vaccination number because he claims only a “50% mortality reduction from mRNA vaccination as demonstrated in Israeli study of 527K vaccinated vs. 527K unvaccinated.”  In other words, he’s saying that vaccination only prevents half of all deaths from COVID.  As evidence, he provides a link to the study’s supplementary appendix.  It’s another red flag that he looks to the supplementary materials rather than the body of the study.

Here’s what the study authors say about the actual risk reduction (emphasis added):

Three to four weeks after people got the first dose of the vaccine, their risk of death from COVID had gone down 84%.  Notice, by the way, that there is no percentage for the follow-up roughly a week after people got their second doses.  That’s because there were no deaths among people who had been fully vaccinated.  It’s more nuanced than this, but it would be more accurate to say that the vaccine is 100% effective at stopping COVID deaths than it is to say that it’s only 50%.

So, how does Bostom justify his 50% number?  He doesn’t explain, but he’s probably looking at this data from the appendix: 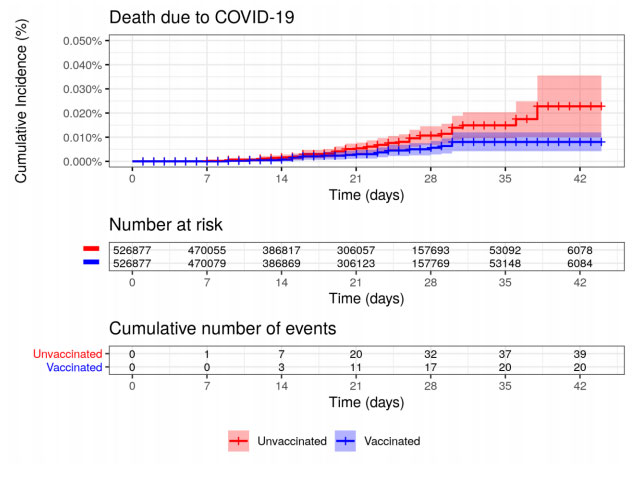 This shows that about half as many people who were in the vaccinated group died as was true in the unvaccinated group.  That’s where Bostom gets 50% effectiveness.  The key point, though, unless I’m missing something in the methodology, is that day zero is the day of the first dose of the vaccine, so people don’t count as fully vaccinated until after day 21 and maybe later if they delayed the second dose for some reason.  Nobody vaccinated died after day 30.  Of course, the study only provides a limited snapshot, but this is Bostom’s data, not mine.  Full vaccination probably is not 100% effective, but it’s certainly not 50%.

To make matters worse for Bostom’s calculation, his related table shows that he applies that 50% number evenly across all age groups.  The study doesn’t provide this level of detail, that I saw, but it’s reasonable to suspect that older people are more likely to die from COVID despite the vaccine than younger people, so the authors’ 84% effectiveness against death percentage is probably very conservative for teenagers.

Without digging through the nuances of how Bostom got to his number of vaccines needed to prevent one death in minors, we can roughly estimate that it really should be around 186,520 (84% effectiveness applied to half of Bostom’s 313,355).  Again, that compares with 415,582 vaccines to cause one death.

Of course, the decision about whether your children should be vaccinated is much more complicated than this.  Everybody, including Bostom, suggests children who are at particular health risk from COVID should be more inclined to vaccinate.  However, it’s reasonable to expect that some of those children (depending what their ailments are) are at more risk from the vaccine, too.  On the flip side, the less need a child has of being vaccinated, the less he or she probably has to fear from the vaccine, and in my view, that calculation is favorable.  On average, COVID appears to be much deadlier.

And then there’s the unfortunate reality that we’re living under an abusive regime that is imposing restrictions it ought to have no authority to impose, and the vaccine is becoming a ticket out of that.  Being locked down has harmful effects, especially on children.

In any event, it’s important to dig into the numbers.  The decision to vaccinate can be scary, but that’s not a reason to accept somebody’s analysis just because it makes it easier to decide against it.

[…] year.  However, the number that has come to light is at the lower end of the two-to-eight range I cited the other day, and COVID is thought to be only incidental, not causative, for all but one of […]