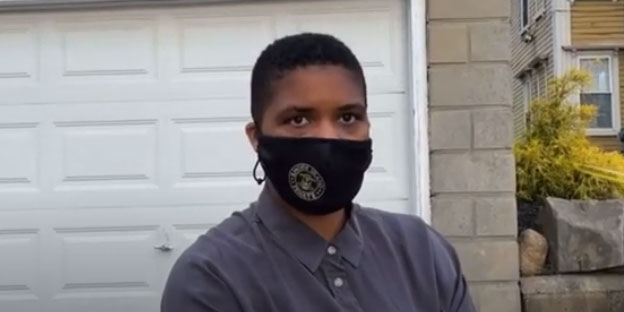 John DePetro’s interview with Sen. Tiara Mack on Providence violence should be a media example.

DePetro caught up with Mack on the streets of Providence while covering the recent spate of shootings there, and it’s a must-watch five minutes.  DePetro was respectful, but really pressed Mack on her beliefs about what’s going on in Providence and the effects of her own public statements.

In a nutshell, to Tiara Mack, violence is not the fault of criminals, but the effect of systemic white supremacy.  Everything is systemic except, naturally, her statements as part of the political system that sow distrust in law enforcement and stoke feelings of victimhood and resentment.

Maybe most striking is her refusal to acknowledge that there are always people who do criminal act combined with her refusal to admit that problems happening right now can’t be fixed in the short-term by her long-term suggestions.

And her policies are all wrong.  She blames a terrible education system and unaffordable housing, for example, but why does Rhode Island have those problems?

Well, in education it has a lot to do with a taxpayer-funded progressive education system blending bureaucracy and a unionized teaching force, combined with the destruction of family structure resulting from progressive social policies.  We’re now years after a heartbreaking report about Providence schools prompted a state takeover, which has been stymied by union intransigence and COVID lockdowns, and nothing is being accomplished.

In housing, high prices have everything to do with restrictive zoning along with an effort to push everybody into cities.  Just a few years ago, Mack’s fellow Providence activists were insisting that it was white supremacy to move to the suburbs.  How do you expect the price of housing to go down if you try to stop people from spreading out?

Progressives’ plan is what you would implement if you wanted to destroy a nation, and indeed, given their rhetoric, it’s pretty clear that’s what they’re trying to do.  Undermine family structures, deprioritize the students in the education system, restrict the economy so people can’t become self-reliant, press people into close living conditions, stoke tribal politics, open the borders, cast criminals as victims, cast law enforcement officials as racist murderers who can’t be trusted, take guns from law-abiding citizens, and so on.  What do they expect to happen?

We need do the opposite.  First, send police into the communities to gain trust and stop the immediate crime problem.  Then reinforce the family, reform education, open up the economy, give people more freedom to decide where they want to live, reinforce a message of equality under the law and a brotherhood of man, and so on.