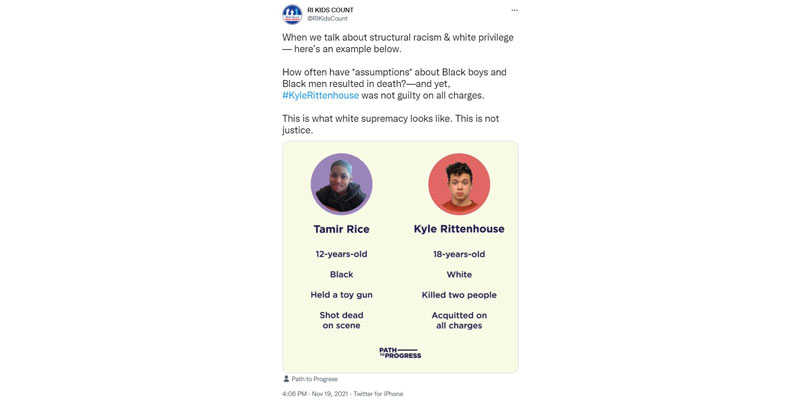 Competition is stiff for the most revealingly shocking social media commentary from public figures in Rhode Island and its surrounding environs.  Travis Andersen captured a bunch for the Boston Globe, including this frontrunner from U.S. Democrat Congressman David Cicilline:

Bringing a gun to a peaceful protest and chasing people down is not self defense. This acquittal is a stain on our justice system.

This is a plain lie, and the congressman must know it, meaning it’s simple, disgusting demagoguery meant to stoke resentment and division, which is likely to lead to violence.

Also in the running has to be this straight-up racism from Democrat state senator Tiara Mack:

My standards for white people was always high AND it just got higher. If you aren’t actively confronting how you uphold white supremacist systems I don’t have time for you.

Of particular importance, here, is how revealing the statement is not only of Mack (from whom such racism is to be expected), but of Rhode Island’s entire political and media establishment.  Nobody in the mainstream will challenge her on this… or even politely ask if it might not be exactly appropriate for an elected official to be so obviously racist.  They’re either scared, in agreement, or too interested in maintaining political hegemony.

The most-shocking tweet, however, is probably the one shown in the featured image of this post.  It’s from the non-profit organization Rhode Island Kids Count:

When we talk about structural racism & white privilege— here’s an example below.

How often have *assumptions* about Black boys and Black men resulted in death?—and yet, #KyleRittenhouse was not guilty on all charges.

This is what white supremacy looks like. This is not justice.

The “example” is a graphic created by the progressive propaganda organization Path to Progress drawing a direct comparison between the heart-breaking shooting of Tamir Rice, seven years ago, and Kyle Rittenhouse.  The two cases have almost nothing in common, except that they involved boys and shootings, and putting them side-by-side serves no purpose but to stir people up and push them toward action, which the past decade proves often turns violent.

Plenty of more-relevant comparisons could be made.  In April, a Maryland police officer shot 16-year-old Peyton Ham, a white boy, who was carrying the same sort of gun Tamir Rice had.  The CNN story at that link leads to similar stories involving whites, blacks, Hispanics, boys, girls.  Children.  According to a 2016 Washington Post report, during two years, 86 people were “shot while carrying fake guns” in America.  Most were male.  More than half were white.  Four were under 18.  It’s horrible, but in a country of over 300 million people, it happens.

What’s particularly shocking about the RI Kids Count tweet, though, isn’t the comparison.  It’s that an organization like RI Kids Count would consider this appropriate use of its official Twitter account.  It’s a respected organization whose mission is to provide reliable information about children in the Ocean State to help citizens and officials make better decisions on their behalf… at least that was its mission as recently as April:

According to the organization’s own most-recent factbook, it’s still the case that 71% of Rhode Island’s children are white (with some portion of that number are Hispanic).  Yet, at some point since April, RI Kids Count changed its mission statement as follows:

The mission of Rhode Island KIDS COUNT is to improve the health, safety, education, economic well-being, and development of Rhode Island’s children with a commitment to equity and the elimination of unacceptable disparities by race, ethnicity, disability, zip code, immigration status, neighborhood, and income.

Apparently, the “anti-racism” wave means organizations can no longer simply advocate for children as children.  Missions have to be changed to advance the radical cause of equity, even if that means spreading dishonest propaganda to stoke division, which can be relied upon to harm children most, particularly disadvantaged children of all races.

WHY do we even recognize, or bring attention, to anything th his flaming IDIOT has to say???

Watch the progressive mainstream media pile on Morgan for the narrative in real time. – Anchor Rising

[…] I suggested at the same time, this is straight-up racism.  The bottom line is that anybody reacting to […]