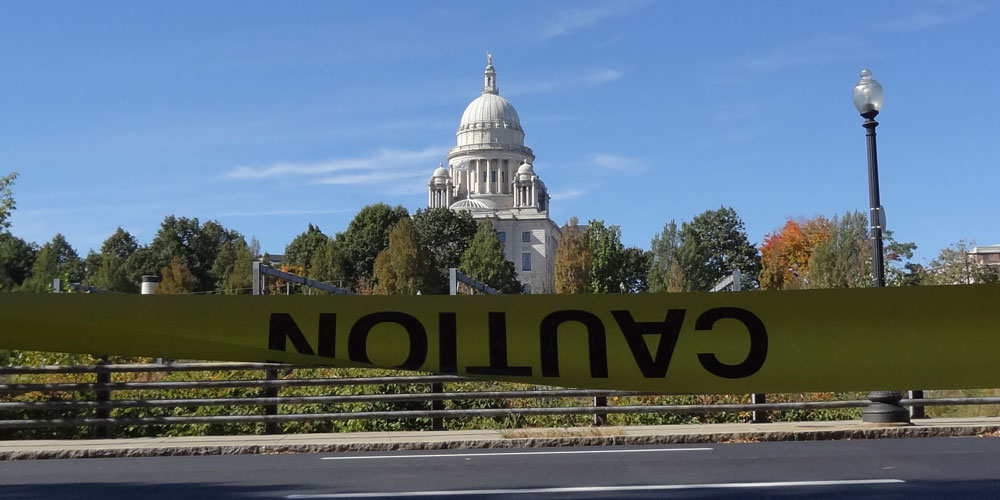 As goes the state, so goes the State House.

One bit of trivia that marks a step on road to full assimilation into the Ocean State when one learns it is that the State House dome is the fourth largest self-supporting marble dome on the planet.  The list goes St. Peter’s Basilica in Rome, the Minnesota State Capitol, the Taj Mahal, then Rhode Island’s Capitol building.

That is our heritage.  And Tim White’s forthcoming report about collapsing marble in the State House is documentation of how well we’re maintaining it.

I’m not merely speaking about the State House, of course, but the whole state… more than the state, truth be told.  The popular understanding of the word, “decadence,” is extravagant expense and indulgence.  We think of flash and great opulence, but the most decadent and costly vice is carelessness, and our entire civilization is succumbing to it.

Many of us who’ve invested so much effort trying to wrench Rhode Island out of its spiral have done so with the recognition that we’re on the sharp end of the flayer’s knife and the hope that we can find the cure and prove its worth here.

The time is short, and collapsing marble is only one of the more obvious symptoms.  The Convention Center gorging on employee bonuses is another.  Put Providence, Barrington, Portsmouth, and other communities that are busily destroying the education systems on the list.  We hear our decadent deterioration every time the power goes out and we learn that a few more neighbors have taken the increasingly necessary step of installing home generators.

Just so do we squander our wealth of money, resources, and social capital.  Those who can afford private schools, generators, and constant auto repairs in lieu of well paved roads are buying the luxury of apathy.

It doesn’t have to be this way, yet every week brings another news story that ought to generate outraged churn of our elected officials, but no longer does.  The governor could propose five-figure annual hazard pay bonuses to the public sector aristocrats who walk the State House halls, and few Rhode Islanders would ask why our state’s massive spending is insufficient to maintain our architectural heritage.

I say leave the marble where it fell as a reminder.  Put some velvet ropes around it, with a plaque bearing a Once-ler-esque warning.  Then fix the State House around it — and fix the state around that — so Rhode Island can be a beacon of hope for those still feeling that knife scraping along their civic nerves.

Do you get the sense our legislators have completely disconnected from reality? – Anchor Rising