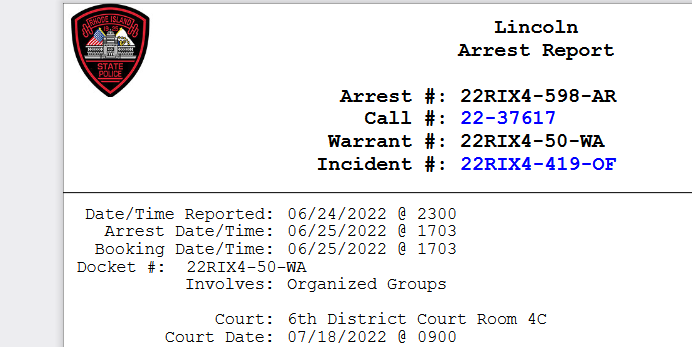 Anchor Rising has obtained from the Rhode Island State Police the Arrest Record of Jeann Lugo pertaining to the June 24 melee at the State House. Click here to view it.

A couple of interesting items from the record:

> The last page includes a full description of the events that led up to Jeann Lugo striking Jennifer Rourke, including the fact that Rourke laid hands on Lugo prior to his reacting.

In the background of the initial assault, Mr. Lugo is seen lunging towards Mr. Mello. At that time, Mr. Lugo’s right arm is grabbed by Ms. Rourke who was standing behind him.

> The record indicates that Jennifer Rourke explicitly states under oath that she did not touch Lugo.

In fact, this is a false statement. So it appears Ms. Rourke has lied under oath – in fact, twice in the above excerpt:

1.) She did touch Lugo “in any way that would instigate a violent response”.

2.) And she states she did not attempt “to remove anyone from the altercation”. Then why did she grab Lugo repeatedly and, a few seconds later, violently shove another man, as can be seen in this video by WPRO’s Tom Quinlan?