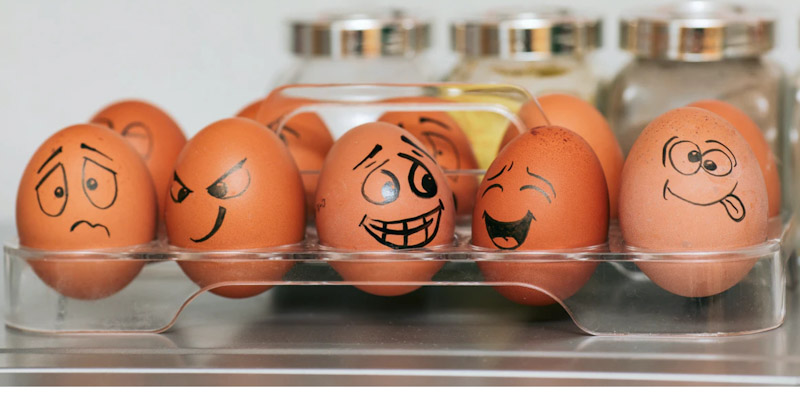 Can the U.S. Survive the Madness of Its Politics?

As the election approaches, we’re moving into another crazy period during which social media becomes the equivalent of youth sports sidelines, with parents shouting out absurdly aggressive claims as if nothing their children do can be wrong while the other team’s children are apparently villainous delinquents.  Here are three examples in order of the risk that they’ll get me in trouble for pointing them out. 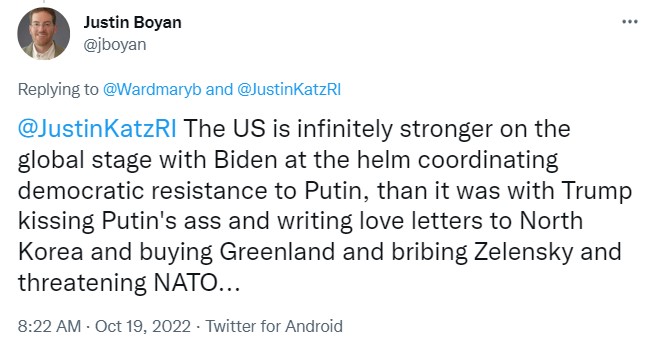 I don’t want to pick on this particular Twitter user, but his statement is made so succinctly that it’s helpfully representative.  His sentiment is simply an assertion contradictory to reality.  Democrats may want it to be true, but it is precisely the sort of passive denial of facts that results in genocides. There’s a reason Biden’s people are working to ensure he doesn’t come into direct contact with Putin.  He’s weak, frail, and not all there, so his handlers must ensure that nobody truly hostile can observe the makeup, choreography, scripting, handling, and coverups in person because a weak marionette in the role we used to call “the leader of the free world” would encourage escalation and violence.

People can hate Donald Trump.  They can despise everything Republicans believe.  But we can’t afford to be deluded about these international affairs, because doing so could get hundreds of millions of people killed.  Although I’d disagree, one could reasonably say that Donald Trump’s negatives overpowered his positives, but it’s simply a fact that the world was relatively peaceful while he was president.  For crying out loud, the crisis in the Middle East was approaching resolution more than at any period in my lifetime.  North Korea was also the least aggressive I’ve ever seen it.  I doubt it was so, but if love letters from were able to accomplish such things, I’ll volunteer to write a few.  The key is that the dangerous and evil recipients must be aware that the leaders sending them will be firm and strong when it matters.

The second topic along these lines where social media rhetoric has become nuts has to do with the economy.  Democrat General Treasurer Seth Magaziner has been particularly egregious in this regard (considering that he should know better as the treasurer and as somebody with an extremely expensive private school and Ivy League education), but this retweet from Democrat State Representative Michelle McGaw caught my eye: 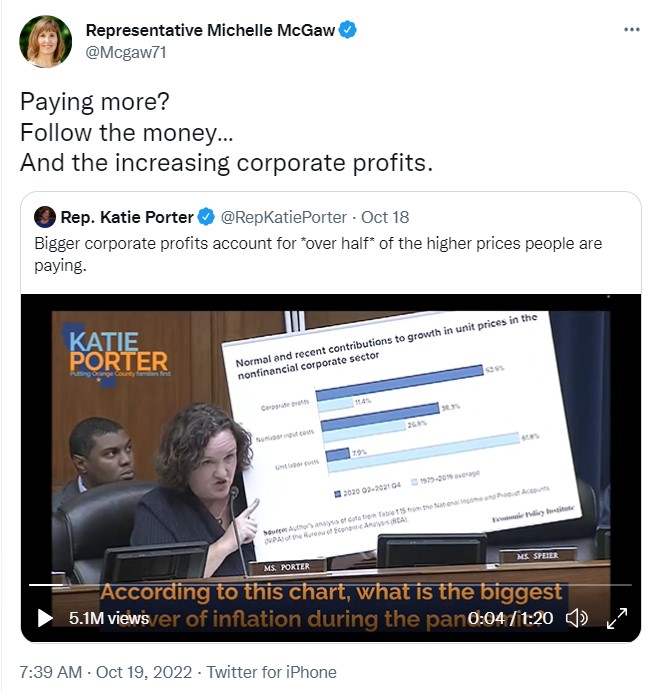 Unpacking all of the ignorance and/or deception in Porter’s video would take much more space than allotted for this post — from the questionable approach of averaging the components of price increases over half a century and comparing them with a single year to the recitation of a progressive activist think tank’s analysis as if it’s a simple presentation of facts.  (We’ll never be able to have a real, objective understanding of an issue if this is how it’s done.)

The key point, though, Porter and McGaw smuggle in with the word “driver.”  Corporate profits are not “driving” inflation; if corporations could do that, prices would always grow.  Something else is driving the increase in prices, and for the time being that shows as “profits” to businesses, inasmuch as “profit” is simply revenue minus expenses.

This is simply how economics works.  The level of demand interacts with the level of supply, compared with every other good and service on the market, to generate a price corresponding with a quantity.  If demand increases or supply decreases, the price will naturally go up, which signals to everybody that there is profit to be made by shifting toward an area in which there’s a shortage.  If politicians demagogue and stamp out the profits, that signal will never be sent, and the shortage will remain or worsen.

The final example of political madness I’ve seen is by far the most sensitive about which to write, but it’s important to notice and discuss.  Observe the following tweet from Democrat Representative Marcia Ranglin, combined with another in which she makes clear the importance of abortion in her advocacy.  Especially considering that Ranglin was not long ago caught up in a controversy for allegedly calling another black legislator a “house slave,” just a little bit of distance raises the question, “What in the world is going on here?”

While I disagree with the progressive premise, Seth Magaziner is walking, talking evidence of white privilege, if there is such a thing, having attended an elite private school with annual tuition to rival many colleges and then Brown University, and having an estimated net worth in the millions at the young age of 39 (with eight of those years spent as a “public servant”).  Yet, Ranglin insists she must actively work to further his political career in large part because he supports a practice that disproportionately kills black children by a huge margin.

How can a civilization survive when it chooses its leaders on the basis of such thinking?

Featured image by Tengyart on Unsplash.