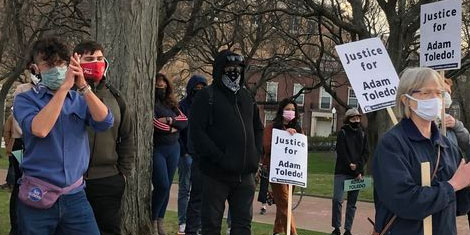 We have to face the more-difficult questions of minority killings.

Nonviolence Institute Executive Director Cedric Huntley’s incredible honesty is refreshing, in an article by Amanda Milkovits for the Boston Globe:

“In Rhode Island, it’s not the police killing our children. It’s Black and brown children killing each other,” said Cedric Huntley. “And the community is traumatized.”

Just in the last week of what’s becoming a violent year for Providence, two men were killed and three others were wounded in shootings. …

No one marches in their names, Huntley said. Their memorials are often just candles on a sidewalk.

“Nobody is saying anything about the kids who get shot. I think they are missing it,” Huntley said after Monday’s rally. “I would love for every time Black or brown kids are killing each other, I’d love to see them out there protesting.”

Superficially, part of the reason for the misplaced attention is that the cops-killing-kids story makes for a neater plot in sensationalist media.  On the deep end of explanations is the fact that addressing social problems rather than bogeymen like “white supremacy” is a more difficult task requiring us all to look at (and change) ourselves.

Part of it, though, is pure cynicism.  Note that the protest at which it appears Milkovits spoke with Huntley (complete with mass-produced signage and completely unidentifiable “security,” as the Globe’s image on this post shows) was organized by Black Lives Matter RI PAC (that is, “political action committee”) and the Party for Socialism and Liberation.  This isn’t about race or even about unnecessary violence.  It’s about socialism.  Indeed, the movement is connected with some of the worst organized violence we’ve seen on American soil in generations, with Antifa riots and attacks.

All of the explanations flow together.  People in disadvantaged communities see the hardship and the violence and long for solutions and somebody to blame.  Those so-called “white allies” feel guilt for their predicament, but they also have emotional and economic incentive to point blame elsewhere.  And then the socialists find it convenient to rile up people who are already plagued with complex emotions and point them at political targets, whether police or a president, because they’re attempting a political takeover.