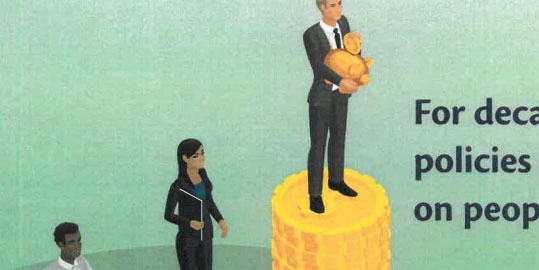 It starts with a lie.

For decades, national and state tax policies have had a devastating impact on people of color in Rhode Island.

The flyer elaborates on this carefully molded problem, complete with charts and this non-sequitur statement:

Tax policies on the state and local levels have played a role in preventing people of color from building wealth on the same level as white families.

The flyer then identified part of their proposed fix: tax the “top 1%” even more. Note, by the way, that they think we are drooling idiots who buy the false premise that state income tax rates have something to do with the inequities cited in the flyer.

Now, a comment about Rhode Island’s top income tax rate is appropriate here because it has stuck in the craw of a few since 2011. Though not specifically mentioned in the flyer, misguided calls to raise the top income tax rate often reference the so-called “Carcieri top income tax rate reduction,” passed by the General Assembly (D) and signed by then-Governor Donald Carcieri (R) in 2011, something that infuriates a few ill-informed poverty advocates and any special interest looking to wring even more revenue for themselves out of Rhode Islanders. What those who deplore this adjustment leave out, however, is that

The tax rate reduction was revenue neutral since the reform also eliminated nearly all deductions and credits then available.

This is reflected in Rhode Island’s overall income tax burden, which ranks near the middle of the pack.  It is important to note that our overall tax burden is eighth highest – undoubtedly exacerbated by high property taxes.

But back to the flyer. What does “Revenue for Rhode Island” propose to do with those revenue proceeds to fix the convoluted, racial-based problem they have constructed? It would go to

This would be a good time to note that the return address of the flyer, so presumably the organizations paying for the flyer, lists RI AFL-CIO, R.I. Federation of Teachers and Health Professionals, R.I. SEIU State Council, The Economic Progress Institute and NEA RI, in addition to “Revenue for Rhode Island”.

To summarize, these organizations are proposing to “fix racial and ethnic income inequities in Rhode Island” by rounding up even more tax money from the rich and handing it over to … “programs and services”; something that these organizations would benefit directly from.

This is kind of like Dave Barry’s description of the disjointed pitch of the dubious televangelist.

Notice you make the vow [to send money] to the Lord, but you send the money to Leroy.

Thanks anyway.  Neither Leroy nor “Revenue for Rhode Island” needs any more of our hard-earned money.