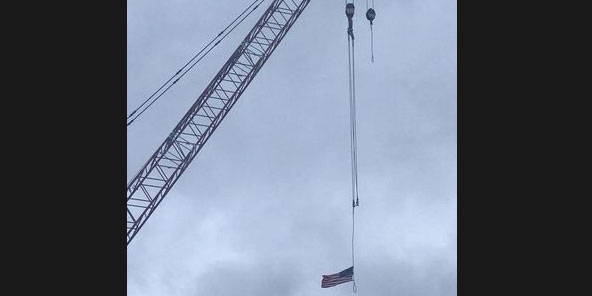 Step back and think about the noose mania on campuses.

It turns out, as College Fix editor Jennifer Kabbany reports, that the moral panic at Central Connecticut State University over an American flag hoisted on a crane above a noose was not a racist provocation:

A construction company building a parking structure at Central Connecticut State University had hoisted an American flag at the end of one of its steel cable loops to mark Memorial Day — but a complaint that the cable was a noose prompted campus officials to apologize and pledge to take down the cable as soon as possible.

“Early this evening, we received a complaint about a possible noose found hanging from a construction site on the CCSU campus. Campus Police … investigated and found that it was not a noose but a standard steel cable loop hanging from a crane,” wrote President Zulma Toro in an email to the campus community on Saturday night.

It turns out that loops are useful on the ends of cables to lift things up, which anybody with even a little manual experience might be able to figure out… and which anybody observing that every cable on the jobsite had a loop at the end could have figured out.

Nonetheless, the school administration went in search of a qualified crane operator to come in (presumably paid overtime) on Memorial Day weekend to lower the cable.  Hopefully somebody explained that doing so would create a safety liability; there’s a reason cables and lifts tend to be hoisted at the end of the workday.  Perhaps simply removing the offending flag would have sufficed.

Of greater concern, however, is the comment of Vice President for Student Affairs John Tully:

… he expressed his concern for those who thought the steel cable loop was a noose or looked like a noose.

“The perception of its noose-like appearance is concerning. We were speaking to people last night who certainly felt some pain, we feel that pain, our president has issued a statement expressing her concern about this and we are working diligently to get it down,” Tully told Fox 61.

I have concern for those who thought the steel cable was a noose and felt pain as a result, too.  I have concern that their college and broader society are utterly failing to prepare them for life.

Frankly, as a parent of multiple college-bound children, I wouldn’t want to pay for a college that indulges students this much, rather than helping them learn to be sufficiently grown up to recognize that loops exist in life for a reason that has nothing to do with racism.