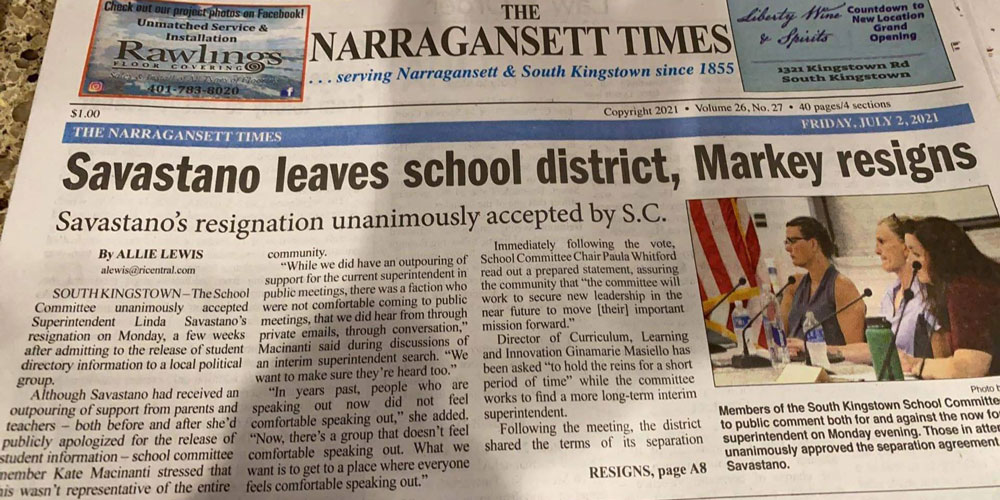 The South Kingstown school committee chair, Emily Cummiskey, the school superintendent, Linda Savastano, and the controversial National Education Association organizer who was on the school committee have all resigned.  These are added to the ouster of Stacey Bodziony from the board of the local Friends of South Kingstown Schools organization board.

The committee has been embroiled in controversy that has attracted national attention on multiple fronts.  The big ones were a political flier sent to school children using a list collected by the district and the eye-catching move to sue a local parent for requesting public records.  Adding fuel to the fire, those public records had much to do with the hot-button issue of critical race theory (CRT).  Added into the mix for some, no doubt, was a racially sensitive teen rape story, in which Markey involved herself.

Given this development, I’d only renew my point from this morning.  We should be very aware of the fact that it took repeated and intense national attention for all of these stories to have an effect.  That’s not a sustainable model for reform, and unless we figure out a way to begin imposing accountability within our own borders, we may look back at events in South Kingstown as merely a hiccup on the way complete domination by progressive insiders.

We really are struggling to keep our democratic rights in Rhode Island towns. – Anchor Rising

Advocacy Solutions took one for the insider team in South Kingstown. – Anchor Rising

[…] is not clear.  Whatever the reason, that attorney, Andrew Henneous, has since resigned, adding to a growing list of local officials who have done […]