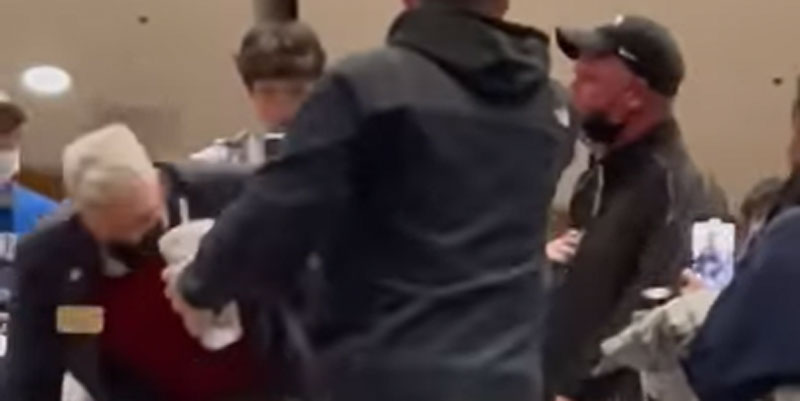 This is exactly the sort of environment the education system in Rhode Island and other places around the country are inviting as they seek to impose ideological radicalism as guiding lights and institutionalize a system of lying to parents.  At the link, Rod Dreher supplies video of the emotional testimony and accusations of Jessica Konen, whose daughter’s school effectively interposed itself into the family and groomed her daughter for sexual abuse before calling child protective services on Konen for being insufficiently woke and making her fear the loss of all of her children.

Parents should picture themselves in Konen’s situation, here:

The teacher told Konen her daughter was “trans fluid.”

“I sat across the table, and I was crying. I was trying to absorb everything.”

“They kept looking at me angrily because I kept saying ‘she,’ and that it was going to take me time to time to process everything,” she said. “I was very confused. … I was very upset. I was blindsided—completely blindsided.”

The teacher accused Konen of not being “emotionally supportive” of her daughter, who was to be called by a new name and male pronouns and would be using the unisex restroom at school. …

“It made me feel very, very small as a parent. I was unaware of anything. Not one time had she mentioned to me ‘Oh, I think that I want to change my name,’ or ‘I’m transgender’ or anything. Nothing. I only heard bisexual one time, and that was it,” Konen said.

Konen describes the experience further in the video.  The teachers positioned themselves on the same side of table with her daughter, across from mom, and comforted her daughter with hugs during the meeting.  This divorce-hearing-like setting is precisely the progressive attitude that your children belong to the government, which is their true and caring parent.

The sexual identity angle of public education’s new assumption of authority is the most personal, but it’s not the only one.  Jeff Reynolds has posted video on Legal Insurrection of an altercation in Glastonbury, Connecticut, when a school board member left the stage to confront a parent over commentary about a politically correct change of the school’s mascot.  The member pushed the man away as he got in his face and was, in return, knocked to the ground with a punch.

Biden’s legal arm and other government agents may seek to put the blame for these altercations on parents and others in the community, but progressives in government are the original aggressors, here.  The temperature could easily be lowered if they would just stop trying to push radical politics on children, but they see total control and domination tantalizingly within reach.

Before throwing punches, though, Americans should follow Rod Dreher’s suggestion in the title of the article at the first link above, “sue them, parents. Sue them into the ground.”