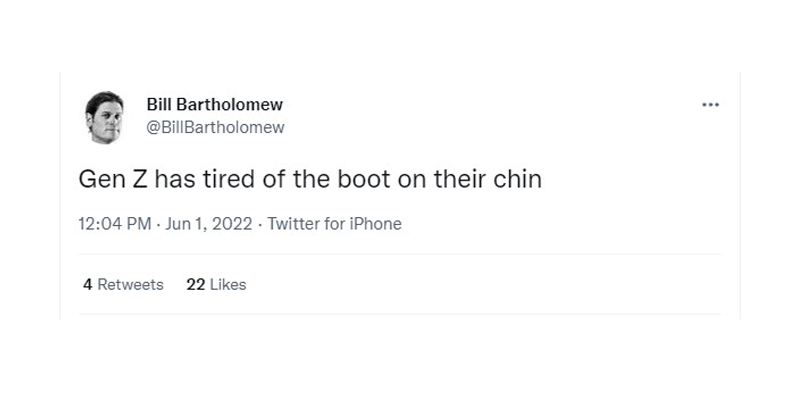 Bartholomew’s role in RI media feels like an early hint of the Cultural Revolution.

For the elimination of doubt, I don’t mean to evoke Americans’ historic appreciation of the concept of revolution.  I mean to warn of the actual possibility of something like this:

Some 1.5 million people were killed during the Cultural Revolution, and millions of others suffered imprisonment, seizure of property, torture or general humiliation.

The dark vision came to me when the tweet used as the featured image of this post from Bill Bartholomew scrolled up my computer screen.

The generation of Americans currently slogging through its teen years is the safest, most comfortable and privileged group of people in the history of the planet.  They carry supercomputers in their pockets as a birthright.  Diseases that once were death sentences are all but cured.  For the most part, they have no experience of war or famine.  A surplus of calories is a far bigger problem than a deficit.  To amplify the point, consider their experience in its extremity.  A global pandemic did not decimate their ranks.  Even their internet access was hardly threatened.  (I offer the qualifier, here, that contrary examples will always be found on this side of Heaven’s gates, but Bartholomew is speaking generationally, not about isolated, rare examples.)

They are what’s known as “summer children.”

The only reason today’s youth feel as if they’re living in an oppressive dystopia is that people like Bartholomew are propagandizing them to believe they are under constant threat of “gun violence, vastly underserved communities, lack of mental health, climate change, environmental racism, widening inequality.”  If “environmental racism” is on your list of grievances, things must be going pretty well for you, whether or not you’ll admit it (or even know it).

Don’t get me wrong.  The hardships will come; to the extent policies Bartholomew supports take hold, they will arrive sooner than later.  I’m not claiming achievement of utopia.  The tragedy for summer children is that autumn inevitably follows.  For the moment, though, the sun is shining.

Why would adults take a generation that should be capitalizing on its comfort and opportunity to reach new heights and prepare for future challenges and, instead, deliberately drag it down with fear and anxiety?

Bartholomew provides a clue elsewhere when he asks one of the teenage organizers of a Pawtucket school walkout what his response is to “fascist parents” on social media.  In this context, the term, “fascist,” has no meaning.  The parents he’s referencing aren’t part of a fascist group.  They don’t promote differential treatment based on ethnicity.  They don’t subscribe to the brand of socialism known as “fascism.”

Rather, Bartholomew calls them “fascist parents” because you’re allowed to hate, even to physically assault, “fascists” according to the current rules.  That’s how this works.  Progressives like Bartholomew label people they you don’t like as “fascist,” “racist,” or something similar, and thereby give themselves license to deny those people’s rights and investigate and oppress them.

In other words, adults like Bartholomew want to put a boot on somebody else’s chin, and they see teens as their means of placing it.

The day may come that Bartholomew attends a rally just like the horrific scenes from Maoist China and celebrates the abuse of the “fascist” grownups whom the kids are beating.  The open question is whether the media organizations that employ him, WPRO and RI PBS, will pay him for the coverage.